An appreciation by Ted Estersohn 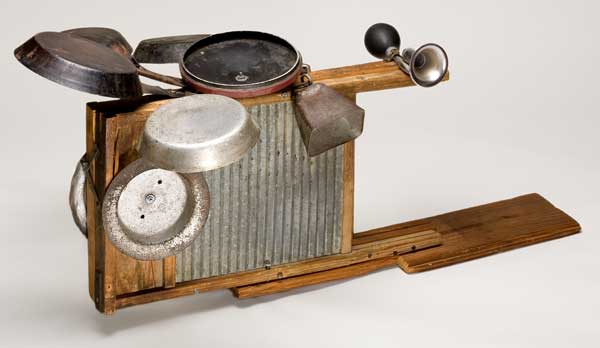 This is the washboard made and played by my friend, the late Washboard Slim (aka Robert Young), who was not just a great blues player, recording with Brownie McGhee and Big Bill Broonzy, but author of a real breakthrough in washboard technology. I realize how pompous that may sound, but it's the plain truth. To wit: first he attached a plank to the side of the board (actually two washboards bolted together), which now becomes the bottom. One sits on it, thereby holding it steady and playing with two hands. It is now plausible to attach in a fan array at the top front [from the new, player's perspective] a selection of pans, skillets, pot lids, and such; as well as cowbell, woodblock, and taxi horn fixed elsewhere around the instrument. 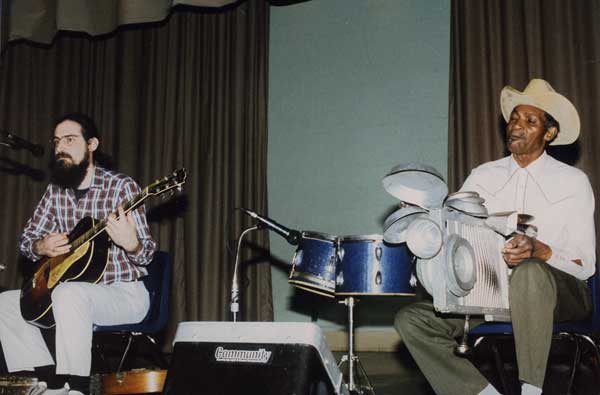 Slim was a friend and partner of mine. The washboard has been in my closet since the day he died, in 1990 [just a few days shy of his 90th birthday]. I'm very proud to say that it's new home is at the Smithsonian Institute's Museum of American History. I believe even as a mute sculpture, the idea is there, fully realized, with a real potential to inspire other future percussionists, to explicate the sounds on his recordings, as well as to memorialize a great folk artist.

It was my pleasure and great good fortune to get to know Slim and work with him through the last decade of his life. We performed around the Philadelphia area in elementary schools, city parks, and also in bars, and even the occasional [if eccentric] wedding; as a duo and as part of a 10(+) piece band, The Wild Bohemians {Mardi Gras in Philadelphia since 1984 and still happenin'}. Slim could continually surprise me. I play bottleneck guitar in a raw Mississippi style (that owes a lot to Fred McDowell) and I always considered it a solo art. I've met very few people who could ride with the idiosyncratic nature of the rhythms, John Colgan Davis on harmonica stands out, but even most harp guys get lost. Slim jumped right in, the very first time, like it was old home week---which I guess it was.

Then there was his 85th birthday party. I knew that prior to having a stroke (I was never clear on the date) Slim had played the trombone, but I was thoroughly surprised when he picked up a guitar that night. Now you need to understand that the horn players in the Wild Bohemians are the kind of guys, you give 'em a chart, it's in the wrong key, you put it on the stand upside down, and they'll play the tune. That being said I can report the hilarity Slim and I shared when these boys were totally flummoxed by the Texas one-chord blues.

As his 90th approached, we got a hall and planned a party/benefit. There's no way to say this but that he passed 3 days before his birthday, and the monies raised, which were intended for his living expenses, paid for the funeral.

Video from Slim's last show, Mardi Gras 1990 with The Wild Bohemians
recorded live at the Barbary in Philadelphia:

Liza Jane
Down By the Riverside
Big Chief 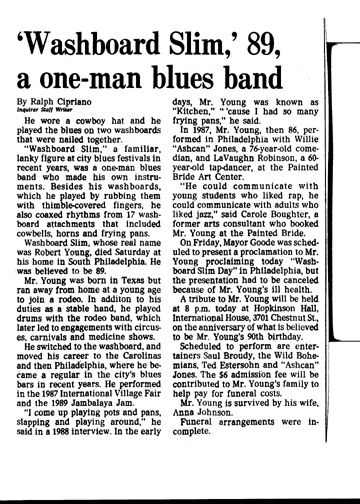 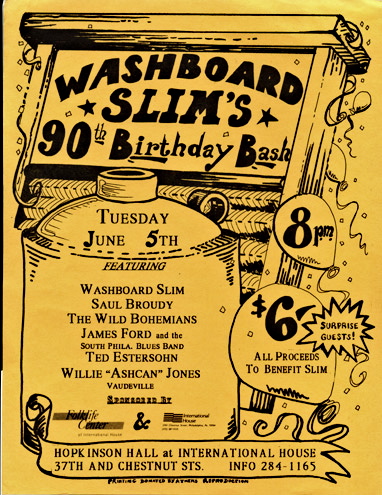 A brief recollection of working with Jesse Fuller